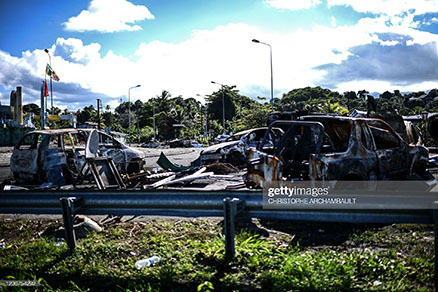 Unrest In Martinique As Protests Against Mandatory COVID-19 Vaccine Strengthens

5 days ago·1 min read
ShareTweetPinShare
Home
Caribbean News
Unrest In Martinique As Protests Against Mandatory COVID-19 Vaccine Strengthens
The content originally appeared on: News Americas Now
A demonstrator holds a sign reading ‘Freedom , truth, respect of our rights’ during a rally in Fort-de-France, on the French Caribbean island of Martinique as part of a general strike called by unions to protest against measures to curb the spread of Covid-19, and labour and social issues. (Photo by LIONEL CHAMOISEAU/AFP via Getty Images)

PARIS, France, Weds. Nov 24, 2021 (Reuters) – Gunshots were fired overnight at police in the French Caribbean island of Martinique for the second night running, French media reported on Wednesday, in a sign that unrest triggered by COVID-19 curbs that has rocked the nearby island of Guadeloupe seems to be spreading there.

BFM TV, quoting police forces, reported that shootings lasted for several hours and noted the situation was still “very tense” even though trade unions had ordered the removal of barricades protesters had set up.

Demonstrators hold flags as they invade the arrival village of the Transat Jacques Vabre sailing race during a rally in Fort-de-France, on the French Caribbean island of Martinique, on November 22, 2021, as part of a general strike called by unions to protest against measures to curb the spread of Covid-19, and labour and social issues. (Photo by LOIC VENANCE/AFP via Getty Images)

Gunfire has also targeted police over the past few days in Guadeloupe, where a general strike entered a second week on Monday, and many stores remained shuttered after night-time looting amid protests over the COVID-19 restrictions.

This photograph taken on November 23, 2021 shows barricades made of burnt cars at Montebello roundabout in Petit-Bourg, on the French Caribbean island of Guadeloupe following days of rioting against Covid-19 measures. (Photo by CHRISTOPHE ARCHAMBAULT/AFP via Getty Images)

People in Guadeloupe and Martinique have been especially incensed by a requirement, also in force in mainland France, for all healthcare workers to be vaccinated against COVID-19.

Compulsory vaccination has touched a nerve in a population that is descended from slaves who worked on French sugar plantations. During the 20th century, many people on Guadeloupe were also systematically exposed to toxic pesticides used in banana plantations.

This Caribbean Head Of State Is In The Pandora Papers

A general strike had also begun in Martinique on Monday to demand an end to the mandatory vaccination of health workers and for action to tackle high fuel prices.

The Caribbean has been hit in recent weeks by a new wave of coronavirus infections that is causing lockdowns and flight cancellations and overwhelming hospitals, just as tourism was beginning to show signs of recovery.