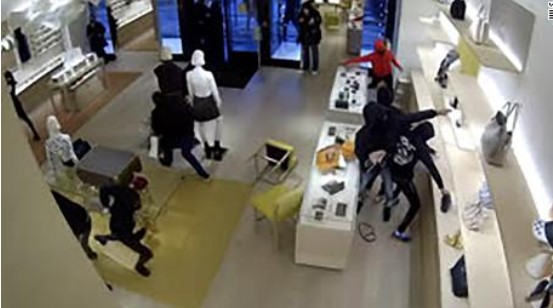 CNN:– A wave of “smash-and-grab” crimes is plaguing upscale stores in major US cities, with mobs of thieves making off with expensive goods in brazen, nighttime raids.

At least 18 people broke into a Nordstrom department store in Los Angeles Monday night and stole thousands of dollars in merchandise, the city’s police chief said.

The thefts followed a rash of similar incidents over the weekend in the San Francisco Bay Area. A group of thieves swarmed the Southland Mall in Hayward on Sunday evening, wielding hammers to smash cases at a jewelry store before grabbing items and fleeing.

Three suspects were arrested Saturday night after a mob ransacked a Nordstrom department store in Walnut Creek, east of San Francisco. Some 80 suspects were involved, and they fled the outdoor mall in at least 10 different vehicles, police said. That robbery came after similar raids Friday night near San Francisco’s Union Square, where thieves targeted Louis Vuitton, Burberry and Bloomingdale’s stores, a Walgreens and cannibis dispensaries.

And California isn’t the only place grappling with “smash-and-grab” crimes. Fourteen robbers barged into a Louis Vuitton store in suburban Chicago last week and fled with more than $100,000 in handbags and other merchandise.

So why so many recent incidents? Are they linked to the holiday season? Is it pandemic restlessness?

“This has nothing to do with the pandemic,” said Pete Eliadis, a former law enforcement official and founder of security company Intelligence Consulting Partners. “The pandemic is overused at this point.”

But security experts cited a mix of several other factors.