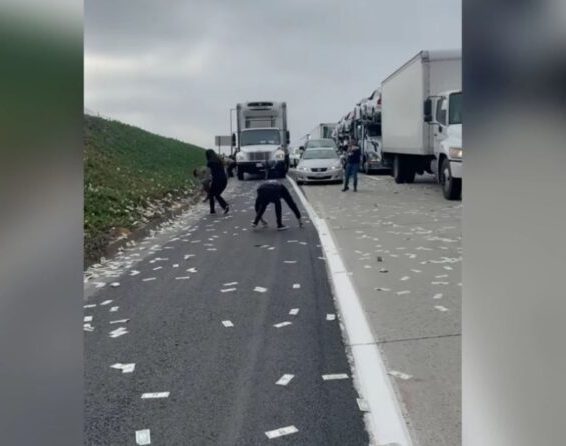 Video captured at the scene by fitness influencer Demi Bagby shows the road at a standstill, with passers-by grabbing and playing with littered $1 and $20 bills.

“This is the most insane thing I’ve ever seen,” she says in the clip, which then shows the usually busy motorway abandoned.

Two arrests were made at the scene, local media reported.

Officer Bettencourt said anyone who stopped to pick up money could “possibly be facing charges”.

“If a bunch of TVs fell from a truck across the freeway, you can’t just take the TVs,” he said in in comments reported by the San Diego Union-Tribune newspaper.

Curtis Martin, a sergeant with the CHP, said on Friday afternoon that about a dozen people had returned money they had grabbed to police.

“People are bringing in a lot,” he said, without giving a figure. “People got a lot of money.”