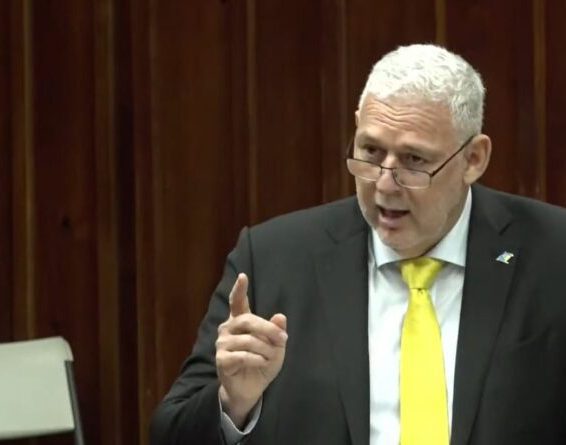 ‘Rule This Country With A Conscience’ – Chastanet Advises SLP Government

Opposition leader Allen Chastanet has warned the administration of Prime Minister Philip J. Pierre that the people of this country are watching the actions of the government, which speak louder than words, and he advised the current administration to rule Saint Lucia with a conscience.

“If your actions are not just and do not reflect the best intentions for the people which you say you uphold, ultimately the most important parliament will be that of the people,” Chastanet told parliament on Tuesday.

He said that the Saint Lucia Labour Party (SLP) did what it took to win the July 26, 2021 elections, and labor MPs’ voices in parliament represented the majority.

“I accept that,” Chastanet declared.

“The mandate in this house is very clear – 15 to 2. But in the people’s parliament you only have gotten the support of 20 percent of the eligible voters. Please take this advice to rule this country with a conscience and to know that 63 percent of the voting population either did not vote for you or did not vote,” Chastanet asserted.

According to the opposition leader, the people listened to what the SLP said in opposition.

However, Chastanet said people are discovering that the SLP’s actions are contrary to what the party said to win the elections.

” Promises, Mr. Speaker, promises are only words. Actions speak much louder than words. So we are all watching your actions.”

” I do not believe the people will sit idly by forever and watch you undermine this country and our democracy,” Chastanet stated.

“So be careful how you carry the mantle of power because the hopes and the dreams of many are attached to it,” the Micoud South MP told parliament.

He said he did not feel threatened but represented the people of Micoud South and the 38 000 people that voted for the United Workers Party (UWP).

“I am also in hopes to represent the many people who were so confused by all the tall tales that were told during the election that they chose not to vote,” the former Prime Minister stated.

He described the situation as a sad indictment on Saint Lucia.

“That is something that we have to address and as politicians we share that responsibility as to what we are doing to encourage and gain the confidence of the voting population of Saint Lucia,” the UWP leader expressed.