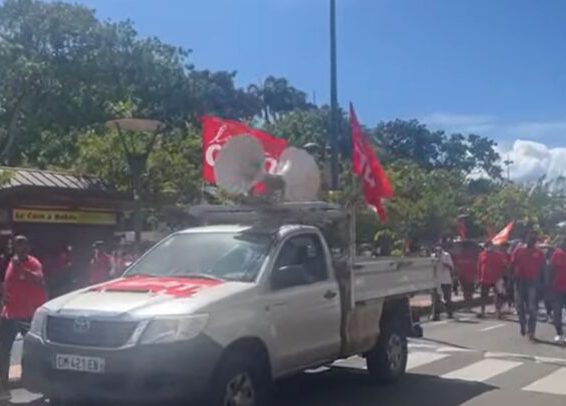 RFI:- Trade unions on the French Caribbean island of Martinique have called for a general strike as of Monday. Their demands include an end to mandatory Covid-19 vaccinations, a salary hike, and free testing for chlordecone, a pesticide used in banana plantations.

Meanwhile, in neighbouring Guadeloupe, elite police have begun dismantling barricades erected during a week of unrest sparked by measures to curb Covid-19.

The call for a general strike on Martinique — with a list of at least 13 demands — was signed by 20 trade unions in Martinique, on the 15th of November and begins today, the 22nd of November.

Oil refinery workers (SARA), guards from the Ducos prison, and workers from across the transport, education, fishing sectors have all decided to join the strike.

The actions will not include blocking roads – as had been suggested on social media – according to Bertrand Cambusy, the secretary for the CSTM union, speaking to local television.

“There will be meaningful actions but nothing to penalise the general population,” he said.

However, tension is high, and there are concerns the situation could spiral out of control as it did in neighbouring Guadeloupe where elite troops have been sent in to restore order.

Protests in the French overseas territory of roughly 400,000 people broke out after an announcement that coronavirus jabs would be mandatory for all healthcare workers. Demonstrations have been marred by clashes and looting.

Thirty-eight people have been arrested and the issue is to be addressed by prime minister Jean Castex and local officials later today. A dusk-to-dawn curfew is due to last until Tuesday.

Why people are angry?

The residents of the French overseas territory are angry about a wide range of issues. The mandatory Covid-19 vaccinations appears to have ignited the violence.

Although administratively part of France, Martinique has been reticent to accept “orders” coming from the central government in Paris, who they see as authoritarian and out of touch with local needs.

Several past health scandals have also tainted trust in authorities. Among the immediate concerns in these protests are:

There has been a push back against the mandatory Covid-19 vaccinations and health passes for health workers. Strikers are calling for this rule to be dropped.

The government-imposed deadline for full vaccination for health workers in Martinique was already pushed back from the 14th of November to the 31st of December. In mainland France, the deadline was 15th of September.

The unions also say suspending, or penalising, health workers who are not vaccinated must stop.

There has also been a call to stop using schools as massive vaccine centres, which strikers say is a form of “propaganda”.

So far the island has vaccinated only 39.4 percent of the population compared to 89 percent of over 18s on the mainland.

On the 16th of November there was 74 patients patients in hospital with Covid, including 23 in intensive care, according to the most recent figures compiled by the public health body ARS.

According to a local public news channel, the strikers are angry over what they see as a policy to develop an unstable, short term job market.

Strikers are calling for a salary increase and for minimum wages to be pushed up. They have also called for a cap on fuel prices.

There are also concerns over the government’s controversial pension reform, which strikers want abandoned.

Other demands relate to increasing protection for taxi drivers and workers in the performing arts, sectors which have been hit particularly hard by tyhe Covid crisis.

Finally, the strikers are also calling for the government to pay for tests to diagnose symptoms linked to chlordecone, a pesticide used in banana plantations in Martinique and Guadeloupe from 1972 to 1993, despite the knowledge of the dangerous side effects as early as the 1960s.

More than 90 percent of the adult population in Guadeloupe and Martinique has been contaminated by chlordecone, a study by public health body Sante publique France showed in 2018.

As a result, the region has one of the highest levels of prostate cancer in the world.
A legal complaint was filed by several organisations in 2006, for “endangering the life of others”.

The complaint accused the state of allowing companies to continue using the toxic product despite knowing the impact on health and and the environment.

In 1990, although chlordecone was banned in France, some companies received exemptions, the complaint said.

Protests were held in February after judges in the case suggested the original damage could be outside the statutory limitation.