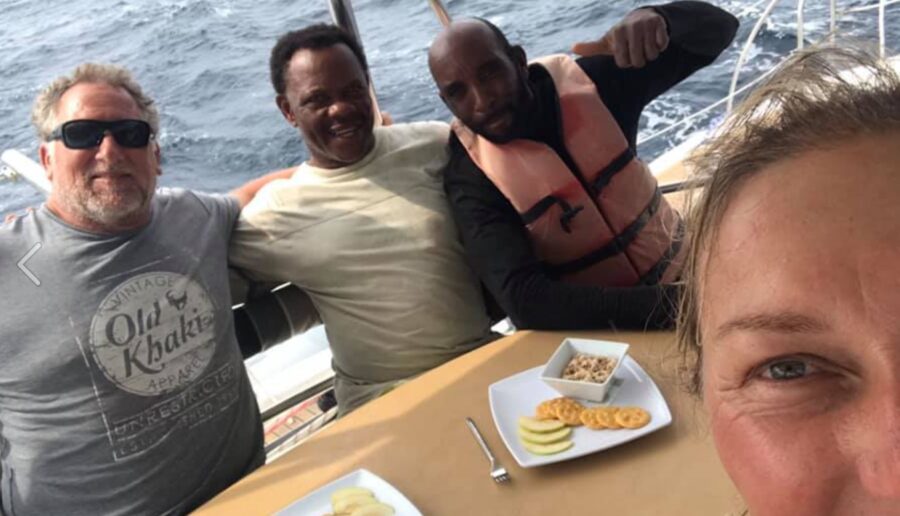 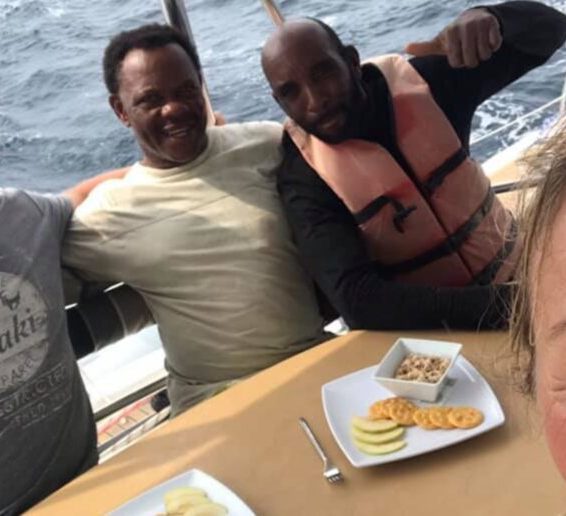 Vieux Fort fisher Arthur ‘Six’ Collymore, who was lost at sea with his crew member Peter’ Mawiyan’ Samuel, has praised the South African couple who rescued them.

Collymore said the couple, Peter and Theresa, whom he now refers to as ‘the Apostle Peter’ and ‘Mother Theresa,’ were ‘more than good’ to him and his friend.

Collymore said they had water, food, and safety gear on board, including life jackets they were wearing when they left.

And after catching some fish and noticing that bad weather was brewing, the duo decided to head back home.

However, Collymore told St Lucia Times that a malfunctioning GPS device diverted them from their intended course, and they eventually concluded that they were lost.

He said he could get no signal on his mobile telephone and switched it off to conserve the battery.

“I said, ‘Okay, if we are lost, I will not use the rest of the gas for now,” Collymore, who is a co-owner of the vessel, recalled, adding that after a while, the GPS battery was going down.

He said he decided to turn off the engine to conserve fuel and let the boat drift in the night.

“We just drifted the whole night talking to each other. We prayed,” Collymore said.

“Again, the kilometres – it was not giving me miles. I couldn’t find the miles on the GPS. I don’t think I took enough, tried enough with that GPS. I only knew a few things on it,” he explained.

“I think we had it on the wrong settings, and we tried to get it on the right settings, but I wasn’t getting it,” he stated.

Collymore said they eventually spotted a vessel in the distance about 10.00 am on Thursday, started their engine, and went in pursuit of it.

The South African couple onboard offered to give them fuel, but Collymore said he pointed out that two gallons of gasoline would not help.

Although heading to the Virgin Islands from Carriacou, he said the couple eventually decided to tow ‘Aqua Man’ and take the two Vieux Fort fishers on board despite initial concerns over COVID-19.

Initially, the plan was to take the two Vieux Fort fishers to the Virgin Islands or Martinique, but the Good Samaritans transported them back to Saint Lucia.

Collymore described the South African rescuers, Peter and Theresa, as having been extraordinarily kind.

“They gave us food, water, and they even asked us to drink a beer with them. They were so kind – more than kind,” Collymore recalled.

“The lady and the husband didn’t feel like they should stay away from us. So they came and sat with us. They told us, ‘The cabin, you all can go when you are ready to sleep. I told him: ‘No, Sir, I am not going to sleep in the cabin. I will stay outside with you.”

He said the two South Africans who went to their aid were ‘Godsends.’
“I don’t know how to thank them. But, I would like to meet them again in Saint Lucia so that I could treat them,” he declared.

“I am feeling so great,” the Vieux Fort resident said of his rescue, adding that there were three recent deaths in his family, including his mother.

And he explained that when he and his partner went missing, it added to the family’s grief.

Headline photo: (L to R) Peter, Arthur Collymore and Peter Samuel. Theresa is in the foreground.