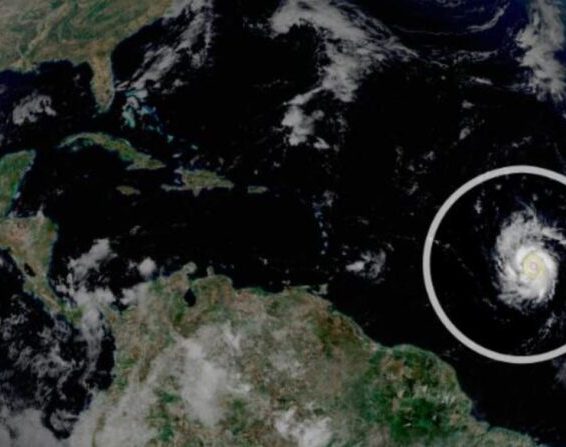 CNN:- Sam started Thursday as a tropical storm, with winds of 35 mph, and ended the day at 70 mph — a rapid intensification that occurs when a tropical cyclone strengthens by at least 35 mph in 24 hours.

By Friday morning Sam had strengthened into a hurricane, and it may undergo a second rapid intensification cycle this weekend, as it’s forecast to become a major hurricane — category 3 or higher — by Saturday afternoon.

Sam is the seventh hurricane of the 2021 Atlantic season, with winds of 85 mph and even higher gusts, according to a Friday update from the National Hurricane Center.

It’s unclear if it will make a landfall

Over the next five days Sam will move toward the Leeward Islands and turn slightly northward as it approaches the islands.

But it remains unclear what impact the storm will have on land. A lot can change over the next several days.

“While nearly all of the models continue to strengthen Sam in the coming days, it’s important to realize that this storm is so far out in the Atlantic it will encounter several different steering highs and lows on its trek west,” said Chad Myers, a CNN meteorologist.

“The forecast is for a turn to the right in several days, but don’t be surprised by a jog or wobble left at times.”

And there doesn’t seem to be anything in the storm’s potential path that will weaken it or cause it to fall apart.

“All environmental conditions are favorable for additional strengthening and Sam is likely to become a major hurricane on Saturday,” said Taylor Ward, a CNN meteorologist.

Puerto Rico, the Virgin Islands, Bahamas and Bermuda will need to watch the storm closely over the next week. And even it Sam stays out at sea, the East Coast of the United States could witness rip currents and high surf late next week. But this storm is just getting its act together. It will take a while for the forecast models to catch up.

Because Sam is a relatively small hurricane, its impact will cover a smaller geographic area.
“It should be noted that Sam has a compact wind field,” the NHC said Friday.

Sam’s hurricane-force and tropical storm-force winds are expected to extend outward up to 15 and 60 miles from the center, respectively.

While this puts Sam near the smaller end of the spectrum, it does not make it the smallest storm ever. That distinction goes to Tropical Storm Marco in 2008, which only had a radial extent of tropical storm force winds of 11 miles.

“Compact storms like Sam are often prone to rapid fluctuations in strength, both up and down,” Ward said.

Sam’s smaller size can also make it more susceptible to wind shear. That’s because large storms are able to fend off things like dry air, but small storms are disrupted more easily.

Air Force hurricane hunters will likely go out and investigate Hurricane Sam, but not any time soon.

Maj. Jeremy DeHart, a meteorologist with the Air Force Reserve’s 53rd Weather Reconnaissance Squadron, said in a tweet that they don’t normally fly these missions until storms get roughly several hundred miles east of the Leeward Islands, or 52.5 degrees west longitude.