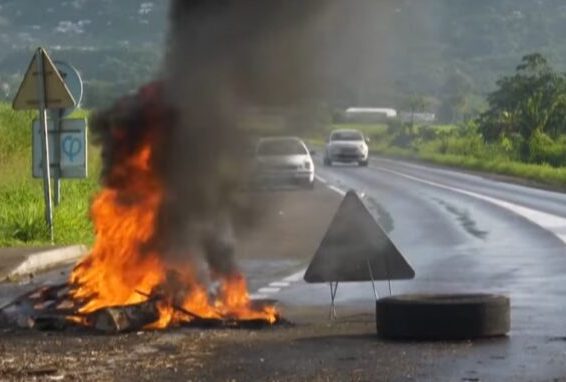 AFP:– France’s minister for overseas territories will hold talks on Monday with union leaders on the French Caribbean island of Guadeloupe on ways to end more than a week of violent protests sparked by Covid-19 restrictions.

The riots began over compulsory Covid vaccinations for health workers and first responders but quickly ballooned into a broader revolt over living conditions.

The unrest, which spread to France’s other Caribbean island of Martinique, has put the fate of overseas territories on the agenda of the campaign heading into 2022 elections, with President Emmanuel Macron’s opponents accusing him of neglecting the former colonial outposts.

Guadeloupe and Martinique, each of which has close to 400,000 inhabitants, are fully part of France, but residents complain of greater poverty, higher costs for basic goods and poorer public services than on the mainland.

Ahead of his visit, Minister for Overseas Territories Sebastien Lecornu floated the possibility of giving Guadeloupe, the more troubled of the two territories, more autonomy.

His proposal drew fire from the opposition, with centre-right presidential hopeful Xavier Bertrand accusing the government of being ready to let France “be broken up” and far-right leader Marine Le Pen accusing Lecornu of trying to “buy off” hardline pro-independence groups.

Lecornu’s remarks also received a lukewarm response from MPs in Guadeloupe, who said the immediate priority was tackling high levels of youth unemployment and other social problems.

On his arrival in Guadeloupe on Sunday, Lecornu vowed to stand firm on the obligation for health workers and first responders on the island to be vaccinated against Covid by December 31 or face suspension without pay. But he insisted he was open to dialogue on other issues.

The vaccine mandate for health workers, which was enforced in September on the mainland, has met with greater resistance in Guadeloupe and Martinique, where vaccine hesitancy is high.

Protesters barricaded roads with burning tyres or taxis and hurled petrol bombs at the security forces in some of the worst unrest in the islands in years.

In Martinique, several businesses were looted and five police officers were injured by gunfire.

Calm had been largely restored by the weekend, however, with only minor skirmishes reported.

France lost most of its overseas possessions around 60 years ago, when its African colonies declared independence, a few years after French territories in south-east Asia.

But Paris still retains control over 12 territories in the Indian and Pacific Oceans as well as in the Caribbean that are home to a total of 2.6 million people.

While some, like Guadeloupe and Martinique, have the same status as regions on the mainland, others, such as French Polynesia, have already been granted autonomy.

The Pacific islands of New Caledonia are to vote next month in the third of three independence referendums.