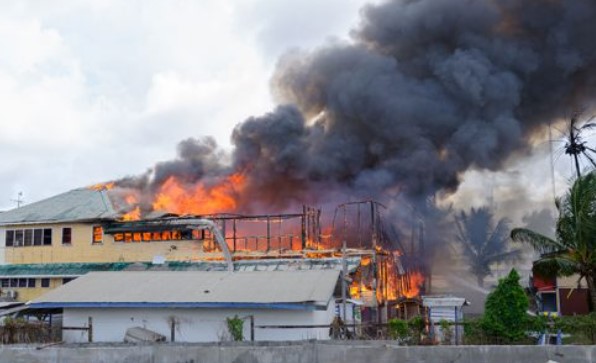 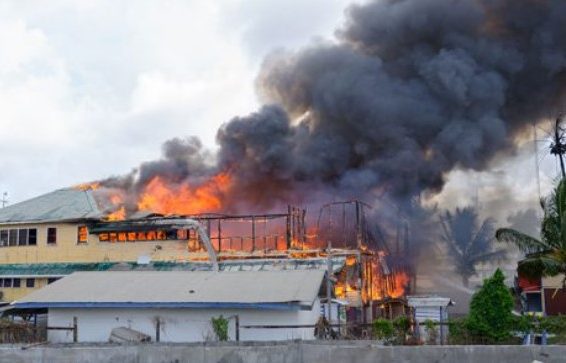 Guyana Chronicle:– THE Guyana Police Force suffered another massive blow on Saturday after a fire of unknown origin completely destroyed the Office of Professional Responsibility (OPR) which is housed at Police Headquarters, Eve Leary, Kingston, Georgetown, but quick action by the Guyana Fire Service saved the Office of the Director of Public Prosecutions (DPP).

Ranks from the fire service and police force were in a race against time to save tons of critical documents from the office of the DPP which is joined to the OPR building.

According to Fire Chief Kalamadeen Edoo, the fire started in the western side of the building where ranks from Police Headquarters reside; it then spread to the OPR building and then the construction department.

The fire service received the report at around13:53hrs and according to the Fire Chief, five fire tenders were deployed to the scene to control the blaze. Upon arrival, they met low water pressure at the hydrant in the vicinity.

“We had an early part in the initial stage [where] there was low pressure coming from the hydrant, but as the process continued, we informed GWI and they ended up boosting up the pressure,” Edoo said.

This fire follows on the heels of another massive fire that completely razed the Brickdam Police Station in October. As a result, Minister of Home Affairs Robeson Benn believes there is a possibility that the fires are politically motivated as he referenced recent threats made by Guyanese living in the United States.

“It appears that we are experiencing a trial by fire again in Guyana. I have said publicly that it appears that a subliminal message is being put around the country starting from some pyrotechnic- minded person in the United States and that maybe perhaps, much more than likely, that the incidents that we see and the timings at which they occur, are related to those more than subliminal messages about ‘Georgetown will burn if the PPP don’t do whatever’,” Minister Benn told the press at the scene of the fire..

President Dr. Irfaan Ali voiced a similar opinion when the fire destroyed the Brickdam Police Station, but he made clear his intention to solicit international support to investigate the matter.

“Why am I bothered? This is coming on the heels of threats made on the capital city from New York and this is not the first time and I’m not going to take this lightly; I am going to ask for international support to investigate, to follow any lead, and to ensure that our capital remains safe,” the President stated.