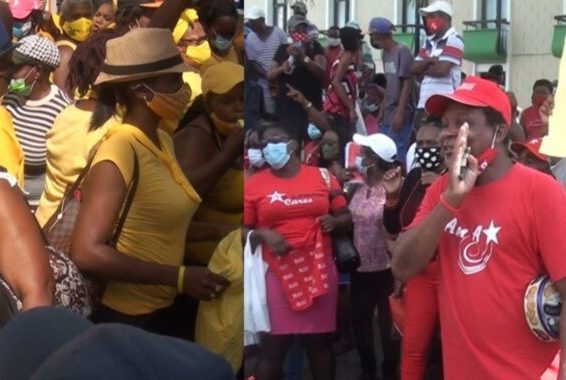 The Chairman of Saint Lucia’s National COVID-19 Management Centre (CMC), Cletus Springer, said he was ‘terribly disappointed’ by this week’s scenes outside parliament and indicated that he plans to approach political leaders regarding the matter.

Vocal supporters of the ruling Saint Lucia Labour Party (SLP) and the opposition United Workers Party (UWP) converged near the house on Tuesday as MPs prepared to deal with the business of the day.

“It is something that I intend to take up with the relevant leaders going forward,” Springer told St Lucia Times.

He described what occurred on Tuesday as disheartening in light of the country’s ongoing battle against COVID-19.

“This is a national crisis and I would imagine that every politician considers themselves a leader in some way, shape or form ,” Springer said.

In this regard, he expressed that leaders point the way forward for their followers and encourage them to abide by the rules that apply to and benefit everyone.

“I was terribly disappointed. I was mindful of the fact that the fourth wave hit us as hard as it did because of the campaign activities that took place before July 26 when we had Islandwide and constituency level motorcades across the country,” Springer observed.

He told St Lucia Times that some may deem what happened on Tuesday outside parliament a repeat of what occurred before the July 26 general elections, although on a smaller scale.

He said the incident did not sit well with him as CMC Chairman.

Nevertheless, Springer said he was pleased with the feedback he saw on the news indicating that what happened did not go down well with many Saint Lucians.

“This is not helping our country to rise against a devastating virus and this may set us back at a time when most Saint Lucians are looking for relief for the Christmas season,” Springer asserted.

“I know the passions of politics run deep in our country. People like to express themselves politically but there are several avenues that are available to us to do this without putting ourselves at risk. We can call the talk shows and I know a lot of that happens. We can vent in private in small groups. But what we saw was totally unacceptable and I am very encouraged that many Saint Lucians pushed back on this and thought we should have a more controlled sedate expression of our views in a crisis like the one we are facing now,” the CMC Chairman stated.