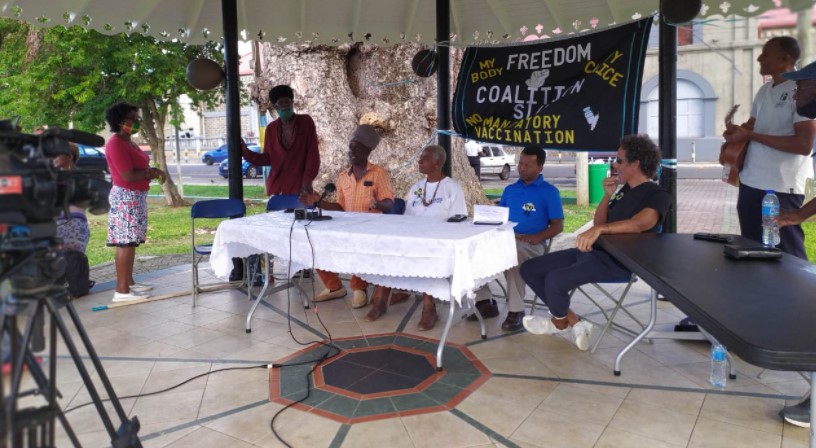 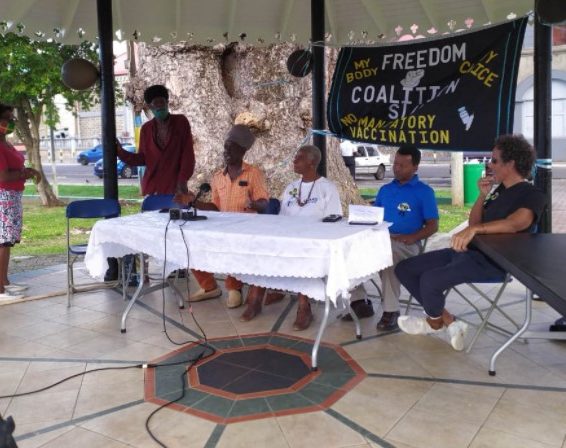 The Saint Lucia Freedom Coalition, formed recently to galvanize support against COVID-19 vaccine mandates and obtain a voice for the organisation in the management of COVID-19 here, believes that vaccine hesitancy will convert into resistance.

“We are a growing movement. We have the majority of the population on our side – three quarters of the population have not been vaccinated despite the very intense media campaign and as more of our information comes out it will become more difficult for the non-vaccinated to become vaccinated because we believe that vaccination hesitancy is now going to be vaccination resistance,” Freedom Coalition leader, Fremont Lawrence said.

Nevertheless, he made clear that the group was not planning any violent protests.

“There may be protests in terms of civil disobedience. We will follow the example of Martin Luther King and Mahatma Gandhi – they did not advocate violent protests. But we might very well have marches and we might be engaging in civil disobedience hoping the unions will join us and there’s industrial action that they can contemplate. I want to make it clear that I am not a violent person and I will not advocate violence in terms of us protesting for our rights,” Lawrence told St Lucia Times.

But he said the Freedom Coalition was hoping to discuss with the authorities to obtain ‘a seat’ at the local COVID-19 management table.

“I think if we engage the government and engage the Saint Lucia Medical and Dental Association and they are receptive, then I think we can have fruitful discussions,” he observed.

Nevertheless, he said he did not want to preempt what would happen. Instead, he wants to be positive and believes the authorities will let ‘good sense’ prevail since the Freedom Coalition and the unvaccinated represent a significant population.

Lawrence declared that information from several countries, including Gibraltar, Israel, and Vermont in the United States, indicates that fully vaccinated people are becoming infected and even dying.

As a result, he described the assertion that COVID-19 vaccines would protect people as a lie.

In addition, Lawrence reiterated earlier comments that people in Saint Lucia who take the vaccine are experiencing adverse effects. Still, he said that the authorities here have not indicated whether a monitoring system is in place.

He says his group wants the authorities to publicise information regarding the vaccine’s adverse effects on people who take it.

The group disclosed that it would be disseminating information via social media since some of the mainstream local media may not want to do so.

Lawrence said the information would help people to make decisions regarding COVID-19 vaccination.

On Saturday, the Freedom Coalition held a news conference at Derek Walcott Square, Castries, and said it is planning other events around Saint Lucia.

Lawrence said that generally, the group believed that the event went well given the late plans for the press conference and that notices went out late.

“We believe the small group that was there was very attentive, very receptive and they really appreciated what we did. We outlined our position on the vaccine and the vaccine mandate the authorities are trying to impose on us and why it was against our sacred and constitutional rights,” Lawrence recalled.

According to the Freedom Coalition leader, the event ended on a musical note with those in attendance singing songs that included Bob Marley’s ‘Small Axe’ and ‘One Love’.

“There was an atmosphere of love and defiance in terms of we are not going to take the vaccine because we don’t believe it’s safe,” he told St Lucia Times.